Last month (April 2020) while under lock down, most of the time I was surfing the internet and eventually bought my wife a cheapo Mi Band 4 simply because it tells the time and more importantly it is waterproof (with the Covid-19, we are told to wash our hands all the time). Click here to read my article titled Watches Are History – We Don’t Need One.

I, on the other hand bought myself a smartwatch called Kronos Blade Genesis via online 🙂 However, it is not waterproof. The reason why I bought the smartwatch is because I was so impressed with the review done by Smartwatch Ticks at YouTube, hahaha. And since the watch only cost about USD150, I thought maybe I should try it out.

I waited for the smartwatch to arrive for more than a month and did not hear from the seller after I made payment. To be frank, I thought that there was a possibility that I may have been conned or the watch may never reach me when I made the order. However, the amount is only USD170 (including USD20 shipping fee) and, therefore I was willing to take the risk.

Then suddenly last week I received an email from the seller informing me that the watch had been shipped out from China. This Monday and Tuesday was a public holiday, therefore I received the smartwatch by courier on Wednesday 🙂

The main reason why Kronos Blade Genesis is the best smartwatch in the world is simply because it has dual cameras and one of them is front/forward facing camera!!!

Most other smartwatch’s cameras are located on the side of the watch which is kind of hard to take photo of anything thus making the camera useless.

The Kronos Blade Genesis also comes with a SIM Slot. Therefore, you can make and receive calls plus connect to the internet directly with the watch without even linking it to your phone. And since it is an Android (version 7.1.1) smartwatch, you can also download any APP! It even has face recognition to unlock the watch.

The box is really nice. The specs as stated on the rear of the box:

The in thing now is wireless ear buds. BUT I tell you, I hate this stupid wireless ear buds because we need to charge them. I prefer to use wired headphone with 3.5mm jacks, no batteries needed.

The watch was more than 90% charged when I got it. So was the docking charger which can also be used as a power bank. 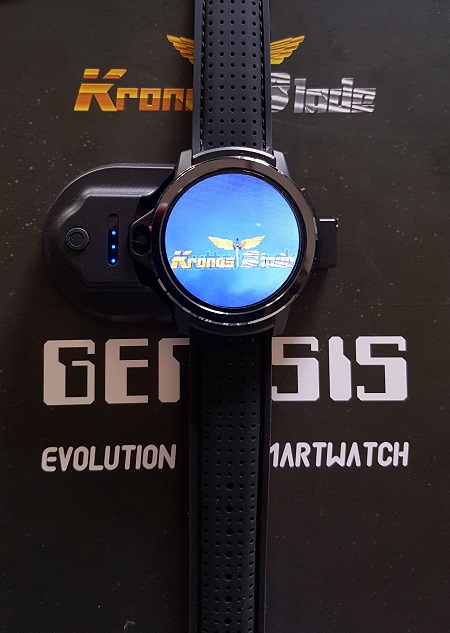 Since this Kronos Blade is an Android Smartwatch, it basically has the same basic features like other smartwatches: 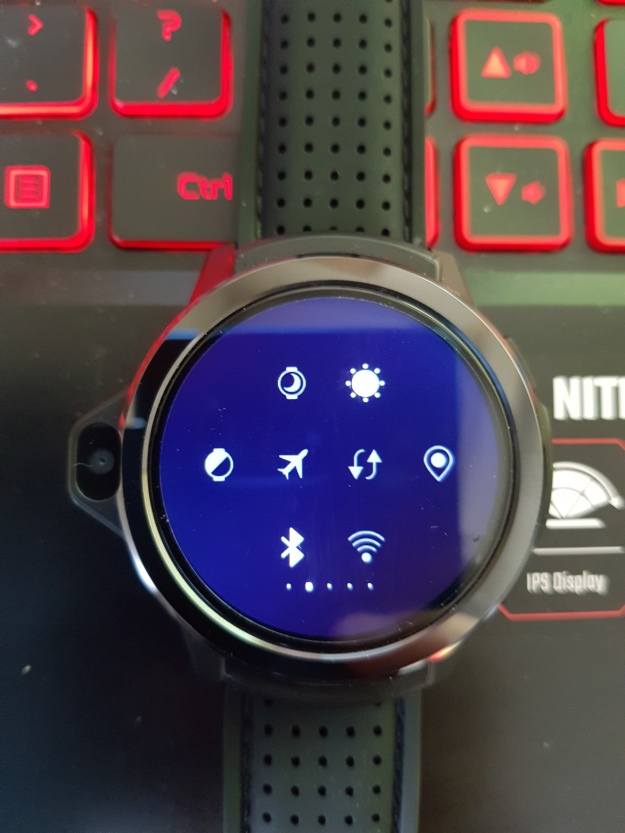 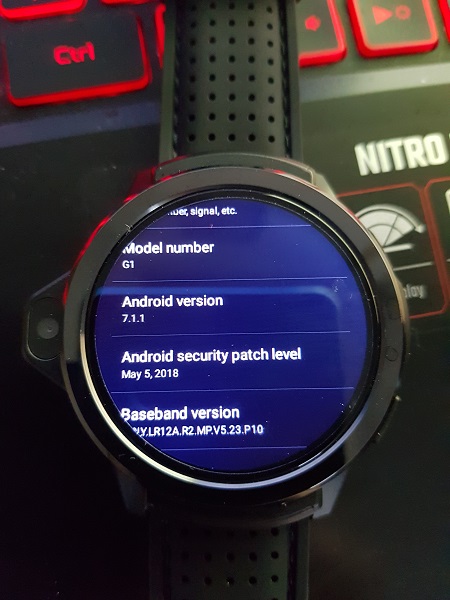 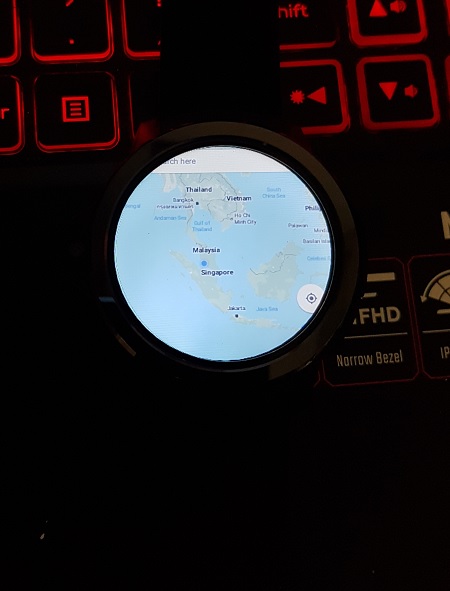 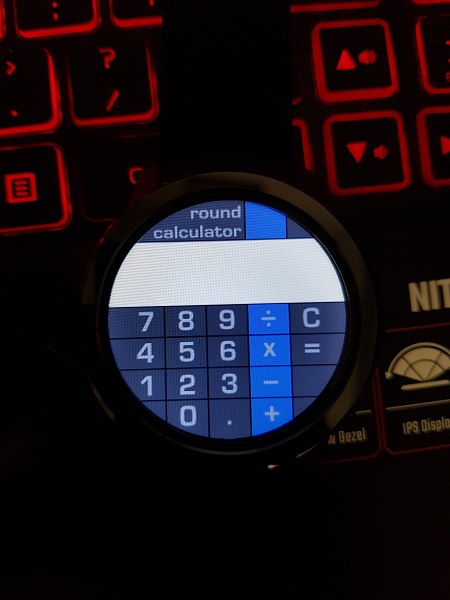 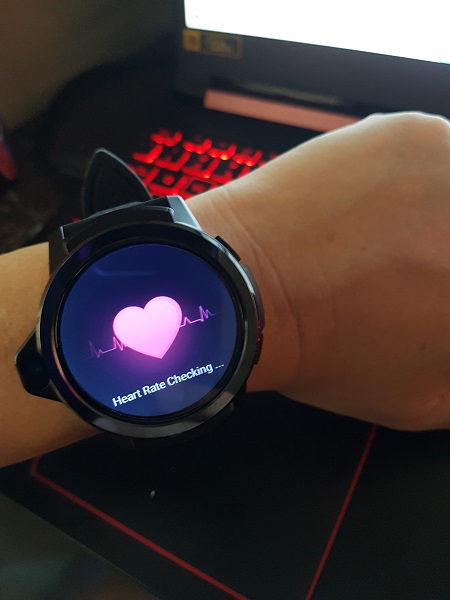 For example below is an SMS message: 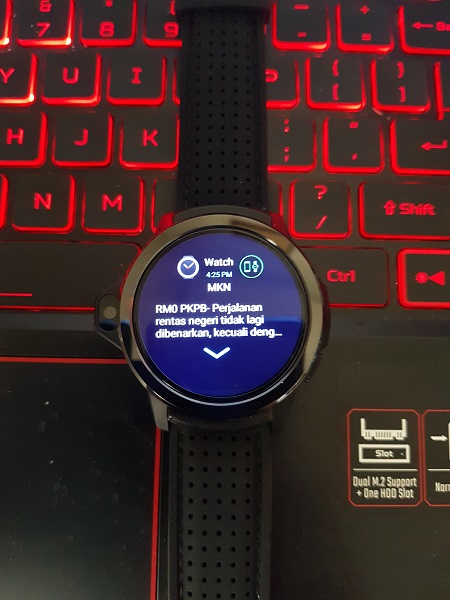 Below is a message from M2U App where one of my children used their MBB Supp Cards in Melbourne – this is nice as I don’t need to refer to my phone to know that my children are burning my money, haha. 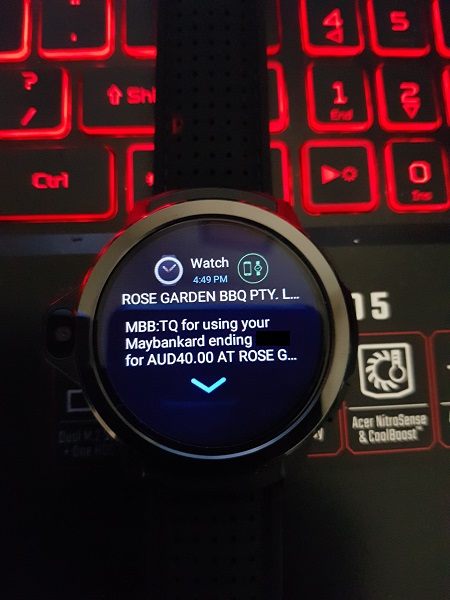 You can also read WhatsApp messages that are sent to the phone:

If I want to use the full features of WhatsApp whereby I can reply messages and perform video calls, I need to install WhatsApp to the Kronos Blade Genesis.

Since two of my cheap Casio watches have been left on my table for months, I thought I might as well take a photo to show you the comparison of sizes between the Kronos Blade Genesis versus Casio Edifice and G-Shock:

Please read update at bottom of post on battery life.

When I first switched on the Kronos Blade Genesis at about 3.30pm, it was already more than 90% charged. To my disappointment, I noted that it was stated that the watch battery can only last for another 7 hours or so. That’s why I hate smartwatches – need to charge all the time. And with wireless ear buds, more stuff to charge.

Actually from reviews done by Smartwatch Ticks, I already knew that the Kronos Blade Genesis battery is freaking lousy. He made a comment that we can wear the docking charger, which is a power bank too, on our wrist while the watch is being charged. I wonder who will do that, hahaha.

The main and only reason why I bought the Kronos Blade was because of the front/forward facing camera. So let’s see how good are the cameras.

Below are two (2) actual photos taken with the Kronos Blade Genesis Forward Front Facing Camera which are not too bad. 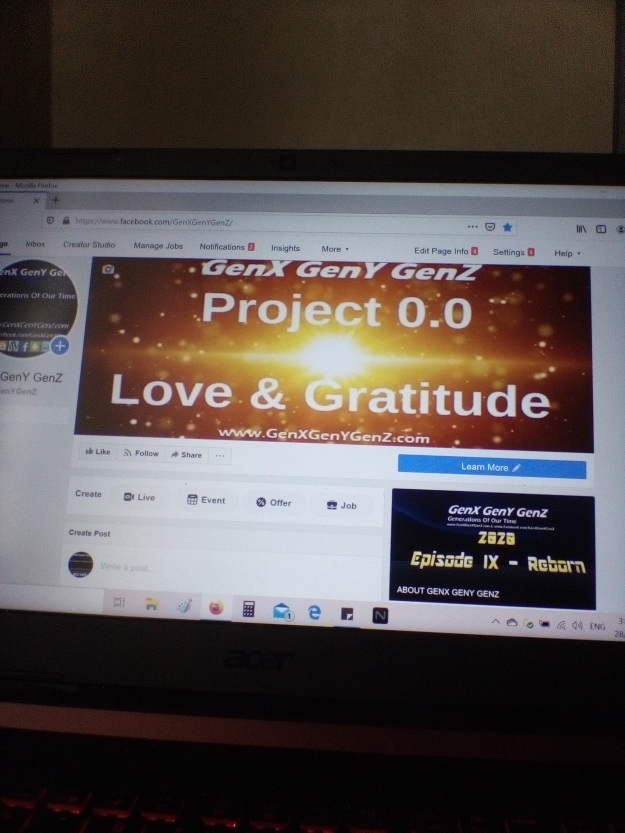 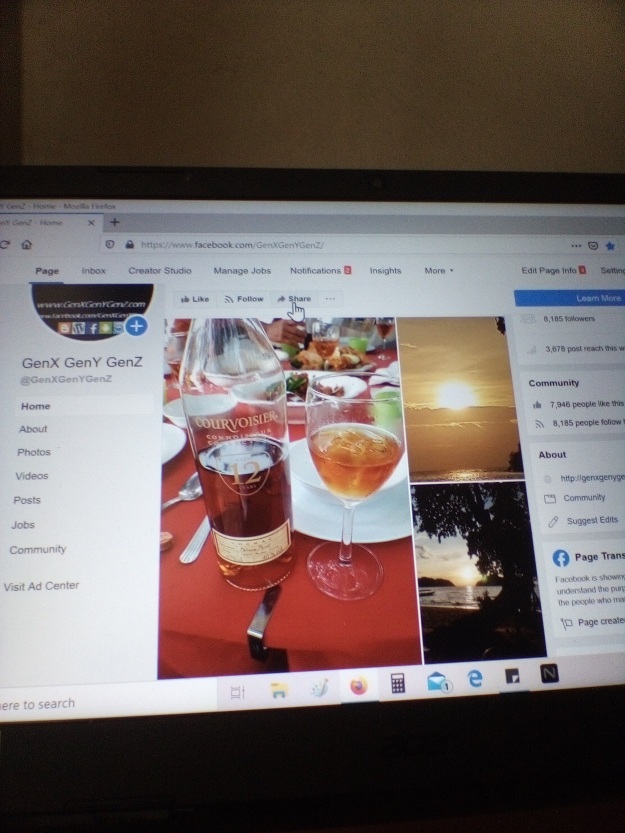 Below is a video to show you the 4X zoom of the Kronos Blade Forward Facing Camera:

Selfie Camera for video calls too:

As Smartwatch Ticks rightly pointed out in his review, the advantage of the selfie camera located on the left hand side makes a lot of sense for a person who wears a watch on his left hand. This is because we still can press/click here and there on the watch using the finger on our right hand without obstructing the camera.

Below is an actual photo taken with the selfie camera:

I have yet to get a new sim card for my new toy to download any apps and therefore I can’t try out WeChat or WhatsApp video calls. Yes I can use an existing google account or even create a new one with wi-fi but I chose not to do so.

And since this is an Android Smartwatch, I can even watch movies or play games with it. But then again this will suck the battery power like hell. Moreover, I have so many phones and a 23″ monitor to watch movies and play games.

I knew that the battery could not last one full day before I ordered the Kronos Blade Genesis Smartwatch. However, in terms of features, this smartwatch offers the best combined features that one can have today, i.e. SIM Slot with Dual Cameras where one of them is forward facing and a super nice screen.

And with the Covid-19, I can’t go out for long hours but only run quick errands. So this watch is good for my present situation and just like any smartwatch, it will encourage me to hit my daily steps goal, hahahaha.

Below is another video showing the 4X digital zoom of the forward facing camera:

Last but not least, when I do go traveling again once it is safe to do so, my Kronos Blade Genesis won’t be following me but instead I will wear my solar powered Casio G-Shock 🙂

I took the Kronos Blade Genesis smartwatch out from the docking charger at about 11.30am in the morning. It was fully charged.

To my surprise at close to midnight (12 hours later), it still had 64% battery remaining and it was stated the the battery can last for another 21 hours! Please refer image below.

Today, I did not play with the watch today and the wi-fi was turned off nor was a SIM Card installed. However, it was connected to my smartphone via Bluetooth the entire time and therefore I did receive notification/messages on the Kronos Blade Genesis that were sent to my smartphone.

This is really good as the battery of the Kronos Blade Genesis is able to last for more than 24 hours which is just nice to record the steps I took in addition to seeing the time.