On 27th May 2019, while at Narita Airport catching my flight to Melbourne on Japan Airlines Business Class Sky Suite (click here to read my review and see for yourself why Japan Airlines is an Award Winning Airline), I bought myself a Casio Edifice Solar Powered Bluetooth watch as a souvenir for My Tokyo Trip 2019. 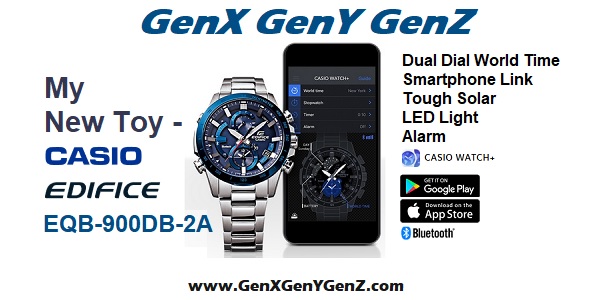 When I reached Melbourne and started playing with the Edifice watch I bought in Narita Airport and was blown away with the ease of setting/adjusting the watch automatically using my Smartphone via Bluetooth. I was so impressed with the Smartphone link with the watch that I started a Japanese Solar Powered Watch Fan Club and asked my followers to forward to me thier watches. To my surprised, many of them owned the Casio G-Shock GMW-B5000 series. Click here to see my friends’ and my Japanese Solar Watches.

On 2th June 2019, while in Melbourne, I dropped by Myer and they were having a 25% sale for all watches. I then bought a G-Shock GW-B5600BC-1 because I really like the new Composite Stainless Steel and Resin bracelet in addition that is was solar powered and has Bluetooth. Once again I was blown away when I found out that this watch was a technological wonder where it adjust the time automatically based on radio signals transmitted by 6 stations around the world. Therefore this watch is freaking good for traveling where I do not need to be bothered adjusting the time wherever I am on planet earth. Then only I knew why many of my friends who are fans of Rolex watches also own the Casio G-Shock GMW-B5000 series and I hope it was not because of fashion purposes, haha.

Click here to read my review of the Casio G-Shock GW-BC5600BC-1. 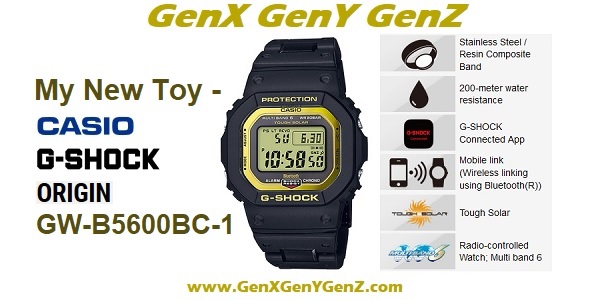 After playing with the GW-B5600BC-1 and found that this cheapo watch (compared to a Rolex) is packed with technology wonders, i decided I shall then splurge a bit more money on a full metal model and I really like the Gold colour and therefore started my hunt for it, hahaha.

Since I was in Melbourne, that’s where I started my search for the gold colour plated G-Shock full metal Origin Digital Watch, i.e. GMW-B5000GD-9

Myer is an Official G-Factory Outlet but they did not have the GMW-B5000GD-9 in stock.

I did find one watch dealer in Melbourne CBD selling the GMW-B5000GD-9 for about AUD853 but since it is not an Official Casio Retailer/Dealer, I decided against buying the watch from them as it will not come with Casio International Warranty.

Many of my friends/followers visit Japan frequently. The G-Shock GMW-B5000GD-9 is selling for JPY68,000.

However, nowadays the B5000 series watches are pretty easy to get in Japan and many dealers are selling it with discount – refer image below where one dealer is offering 15% discount. 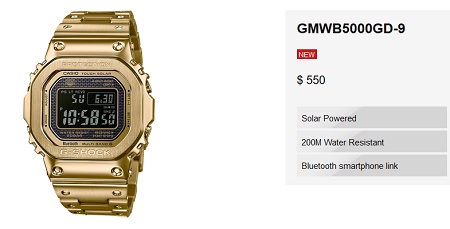 Since there was no stock of the GMW-B5000GD-9 in any of the Official Casio Retailers in Melbourne, I decided that I shall buy it from Malaysia 🙂 So I called every single G-Factory Outlet in Klang Valley listed in Casio’s Website. And to my delight, on 5th June 2019, the G-Factory at One Utama (1U) had stock! For this model they were not offering any discount; therefore, if I wanted it, I have to pay the retail price of RM2,549.

However, I am only scheduled to return to KL on 12th June 2019 and the G-Factory at 1U would not reserve the watch for me. So I called one of my followers who stays just around the corner of 1U to go purchase the watch for me and he happily agreed to my request (that’s one of the perks of having many followers all over Malaysia and around the world – I can ask my followers for assistance if I need it).

I explained to my Bro that the 1U sales person informed me that the watch is first come first serve and because I kiasu, I needed him to immediately go purchase it. Well, he knows I am a kiasu person and without any hesitation went to 1U to purchase the watch for me! 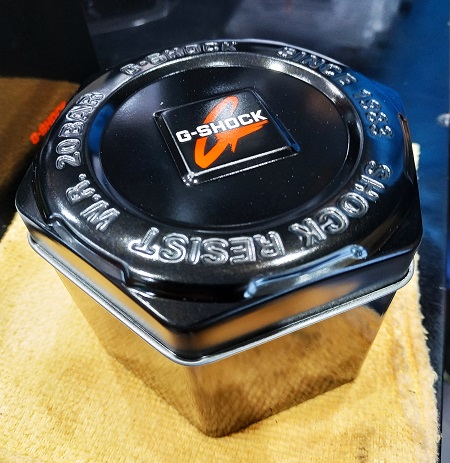 I am still in Melbourne and can’t get to play with my new toy until next week, hahaha.

I would like to take this opportunity to thank my Bro who took the trouble to help me to purchase the Casio G-Shock GMW-B5000GD-9 Full Metal, Solar (so that I do not need to change batteries), Bluetooth (connects the watch to my smartphone), Multi 6 Band Radio Receiver (which automatically adjust the time of the watch), 5 World Time (I just have to select the 5 cities of my desire out of 300 cities using my Smartphone), 5 Alarms and 5 Reminders  (both which can be set using my smartphone), LED backlight and even record the place (coordinates) I am at by simply pressing one of the button.

Bros & Sis, I recommend that you get a G-Shock GMW-B5000 series or GW-B5600 Series watch as they are technological wonders that are great for everyday use and wherever you are on earth. To read more about the features of these watches, please click here to read my review of the G-Shock GW-B5600 which has the same technological features of the GMW-B5000 but much cheaper.

On yes, there is a major difference between cheaper G-Shock and the metal casing GMW-B5000 series which come with Sapphire Glass.

My Hunt For The Red Heritage G-Shock GMW-B5600HR-1

Actually the G-Shock model I really wanted to buy before I bought the GW-B5600BC-1 (on sale with 25% discount at Myer) was the G-Shock Red Heritage GW-B5600HR-1 but it was not on sale at Angus & Coote (another official G-Shock Outlet in Melbourne) but selling at retail price of AUD399 (refer photo below). 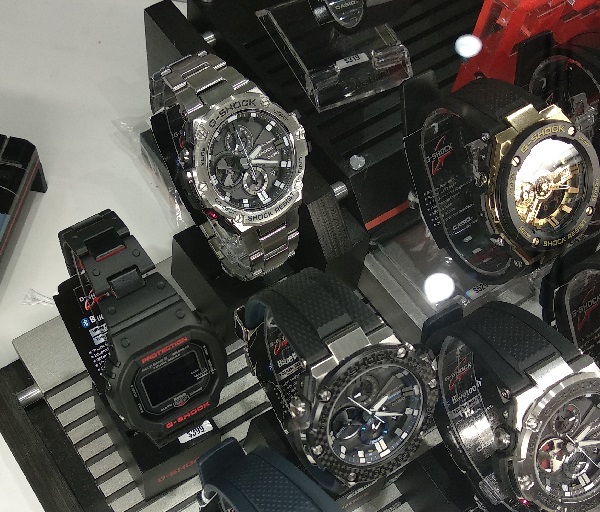 The official retail price if the G-Shock GW-B5600HR is RM929 in Malaysia. 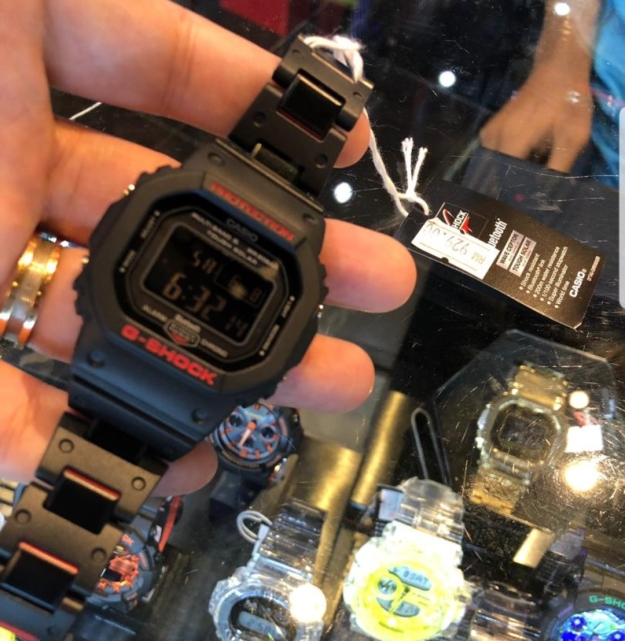 Below is the sale price of the GW-B5600HR in Singapore, SGD209, after discount:

But God always blesses me, you see, on 6th June 2019, another Bro of mine (who is a Rolex collector and G-Shock watches too, he is the one who has the 3 GMW-B5000 watches shown in my Japanese Solar Watches Page) was holidaying in Thailand and informed me that the GW-B5600 series were on sale for 50% off! 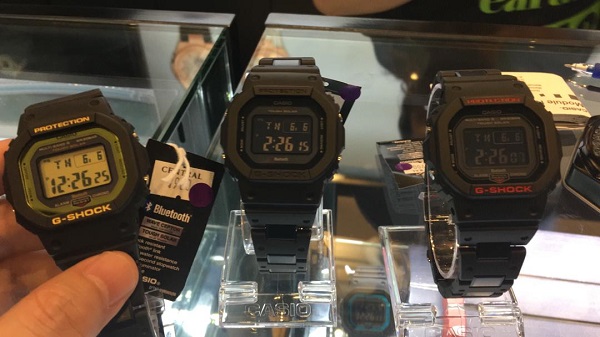 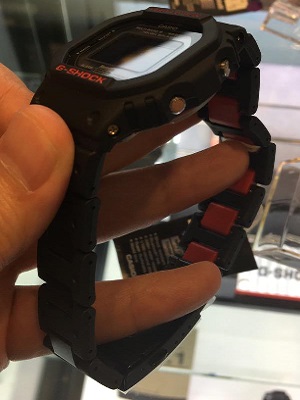 As you can see from the above image, the G-Shock GW-B5600HR-1 Composite Stainless Steel and Resin bracelet is damn cool as it is two tone at the back – makes the person wearing it shiok sendiri, haha.

And since the G-Shock outlet was offering 50%, my Bro also bought the blue B5600 which is slightly cheaper as it has pure resin bracelet (refer to the image below to see the difference in bracelet).

Since I have so many G-Shock watches now, and after playing with the G-Shock GW-B5600BC-1 (bought at Myer with 25% discount) for a few days, I have given it to my second son (he has a Limited Edition Bell & Ross GMT and Half Gold Rolex GMT).

I can’t wait to return to KL to play with my new G-Shock watches, i.e. Gold Colored Solid Metal GMW-B5000GD-9, Red Heritage GW-B5600HR-1 and Limited Edition 35th Anniversary G-Shock which has yet to be official launched in Malaysia as of 7th June 2019. 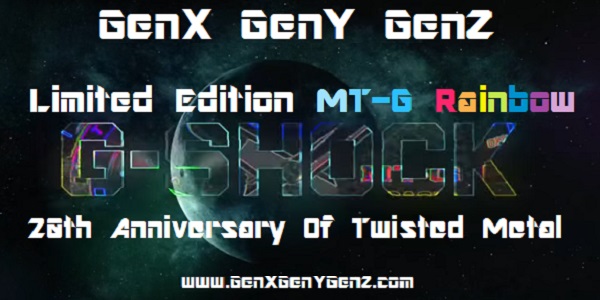