IMPORTANT ANNOUCEMENT – click here to learn the revision to Treats Points effective 15 April 2016 and what credit cards you should use for transactions relating to Government, Education, Insurance and Utilities.

In 2015, we, credit card users were hit with a double whammy which affects our purchasing power. The first whammy occurred on 1st April 2015 when the government of Malaysia started imposing 6% GST which led to an increase in the prices of almost everything (excluding cars where the price magically reduced for the first time). And then on 1st August 2015, Maybank revoked the 5% cash back on weekends for any type of transactions with their Maybank 2 Cards AMEX; thus making many of us potentially poorer overnight by RM600 a year (maximum possible cash back).

However, luckily you have me to soften the blow of the above two whammies and in particular the latter. You see, I heard a voice over and over again in my head instructing me to present to you guys alternative ways to regain some of the losses inflicted by Maybank onto us. Now I don’t think the voice was from God but I think it was more of my guilty conscious telling me to make up for making you guys get stuck with the Maybank 2 Cards from my years of promoting it! Hahaha. So, in July 2015, I presented GenX’s Recommendation of Credit Cards 2015, at my previous blogspot, where I listed options available to replace the once upon a time fabulous Maybank 2 Cards.

Not long after I published GenX’s Credit Card Recommendations 2015, I started to once again hear voices over and over again in my head, it kept telling me that my Top 10 Credit Cards Ultimate Showdown 2016 may not necessarily teach those who read it as to how to optimize their returns from using the right credit cards. So, I started brainstorming with the voice (talking to myself) and suddenly out of no where a brilliant idea was born.

As you are well aware, most car manufacturers have a special unit that modifies their cars and brings them up to a higher classification, i.e. MB – AMG, BMW – M3, Mini – John Cooper Works, Toyota -TRD, etc.

Well, I decided that I shall compartmentalize my brain and form a special unit to make full use of my sick imagination and brain cells to modify credit cards, thus, calling the improved product –GenX’s Totally Recommended or in short GTR.

And since this GTR department is new, I decided that they should start with Entry Level credit cards for the mass market where most users can benefit from their daily use, example, like the reliable Toyota Vios but equipped with TRD fittings. If my first GTR product receives overwhelming success, maybe then I shall modify higher level cards. For example, starting from Entry Level Gold and Platinum Cards (Toyota TRD and Volkswagen Polo GTR) followed by Visa Signature (Skyline GTR) and ultimately Premier Credit Cards (Bentley Coupe GTR), hahaha… 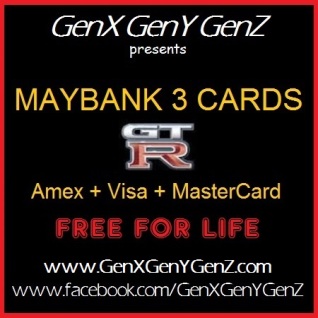 I have mentioned before – Cheap No Good – Good No Cheap – FREE IS THE BEST!

So, the first order of business is to identify credit cards that offer FREE FOR LIFE annual fees without any conditions. And after analysing the numerous FREE FOR LIFE credit cards available plus killing myself faster with few boxes of cigarettes for your benefits, I am proud to present to you Maybank 3 Platinum and Gold Card GTR, combination of AMEX, Visa and MasterCard.